Now don’t think you’re going to get some secret ingredient here because my recipe is pretty basic. But with the right ratios of those basic ingredients, I think you’ll agree that this guacamole is pretty special.

I know I sound like I’m tooting my guacamole horn but I get requests to make guac for just about every party I go to but I recently had such a nice compliment that I figured this post was far past due. It all started when I made it for Sophia’s end-of-the-season soccer party and a bunch of people at the party asked for the recipe. Then a few weeks into the summer, I got this text from one of my fellow soccer moms: “Huge shout out to you for the guacamole recipe. I have made it 4 times for different events/people and everyone LOVES it. Thank you!!!” (So you can all thank Donna for her compliment because it made me finally get around to writing this post.)

I meant to share this recipe with the Sue at Home readers years ago but…I ate it. No — seriously. Back in 2012, I photographed every step of the chopping process but then once it was in the bowl, it disappeared so quickly that I never got a shot of the actual finished product. Oops. Luckily, I got some shots this time before I inhaled it so let’s get down to business, shall we?

First off, you’ll need 5-6 ripe avocados. Don’t even attempt this recipe if your avocados aren’t ripe because you’ll waste your time and end up with crappy guacamole. (And it won’t be my fault.) I get mine at Whole Foods because  they always have ripe ones. The rock-hard avocados that most stores sell won’t be ripe for about 6 days…and who wants to wait that long for guacamole?

You’ll need 1 or 2 vine-ripe tomatoes. I usually take most of the guts out but I leave a little to keep it juicy. Chop ’em up but don’t worry about getting them too small. 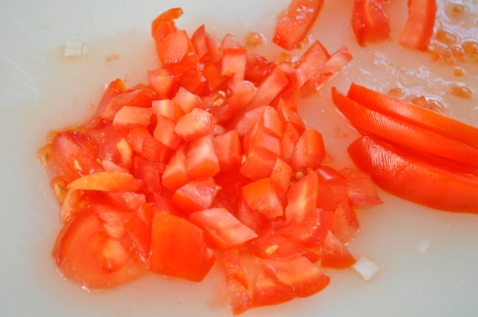 Most guacamole recipes call for red onions but since they’re disgusting and they repeat on me, I use spanish or vidala onions. Just a half an onion chopped up should do it. Now is a good time to mention that I use one bowl for the good stuff and one bowl for the junk because it makes me feel like I have my own cooking show. Oh — and my bowls are from Anthropologie (similar here) but you probably already knew that because I used them in the rainbow cake post.

Next up is the divisive cilantro. I know some people don’t like it. (In fact some people are even genetically predisposed to think that it tastes like soap. If you think I’m kidding, you’ve got to read this article in the New York Times. Apparently, even Julia Child hated the stuff.) But the recipe isn’t quite the same without it so just hope that you don’t have any of those cilantro haters in your audience. Grab a big handful off the bunch and chop it up. Technically, you’re supposed to pull the leaves off the stems but I never do and I’ve never had a complaint.

To give your guacamole a little kick without lighting your guest’s mouths on fire, a few jalapeno peppers should do the trick. This is one part of the recipe that has evolved over the years. I used to use one jalapeno, then two. Now I’m up to three or four. As long as you take the seeds out, the jalapenos will just add some nice flavor without too much heat. Just be sure to really mince them so your guac doesn’t have huge chunks of jalapeno. A couple tips: Cut the top off and then make a few little slices down the side with your paring knife. (See below) Then you can slide the knife in and separate the guts from the outside without getting seeds all over the place. And also — scrub your hands like crazy after handling jalapenos because if you don’t and you’re a contact lens wearer like me, your fingertips will burn your eyeballs like the depths of hell. (You’ve been warned.)

I like my guacamole nice and citrusy so I use the juice of a whole lime. Can’t you practically hear Tom Colicchio saying that my guacamole has “good acid”?

Two more things — which just might be the most important ingredients of all — salt and pepper. I’ve never measured the amount I put in but I can tell you that I’m very generous with the salt. Go ahead and mix everything up and then add salt and pepper to taste. I just keep adding salt until I think it’s perfect. (And to those eagle-eyed readers out there — yes, that’s the pepper shaker from the set of shakers we gave out as wedding favors 14 years ago! More on those here.) 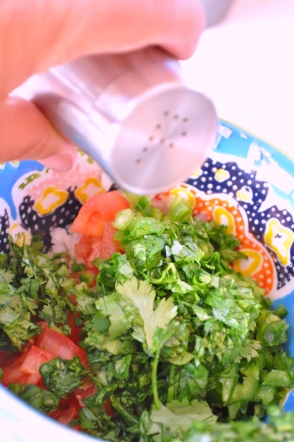 Some people slice up the avocados before they scoop them out but I find that they mush up nicely without doing that. Just scoop them out with a spoon!

Of course, this is just a personal preference but I like to serve my guac with Tostitos Bite Size chips. If you use a bigger chip then you end up eating more chip and less guacamole and really…isn’t the guacamole the star, here?

You’ll definitely want to make this fresh right before you serve it or your guacamole will turn brown. But if you need to, go ahead and combine all of the ingredients (except for the avocados!) a day in advance and keep them in a closed container in the fridge so all the flavors can party and get to know each other.

Sue At Home’s Only Guacamole Recipe You’ll Ever Need

Juice from a whole lime

Salt and Pepper to taste

Chop all of the ingredients and stir until mashed and combined. It makes a nice, big, party-size portion but it’ll go fast. (One time my friends ate the whole bowl while I was busy making mojitos. True story.)

Sue at Home is about my life outside of work. I'm a part-time magazine fashion editor and a full-time mom in the 'burbs. I love renovating my mid-century home, hunting for interior design ideas, being silly with my stylish kids, looking for fun and easy fashion inspiration, and doing all things crafty and creative. (All opinions are mine and not those of my employer.) View all posts by sueathome

2 thoughts on “The Only Guacamole Recipe You’ll Ever Need”

Leave a Reply to EatingWellNYC / The Mew Life Cancel reply

True story: when I saw how gorgeous these peonies looked against my dark teal wall, I stopped what I was doing and spent 5 minutes photographing them. I m an, I had to. Right? 😉 #peonies #givemeallthepeonies #peoniesenvy #peony #inspiration #spring #cutflowers #westfieldnj #libbyandsmee #inspo #color #flowers #livecolorfully