Just in time for our annual Halloween soiree, I finally got the house all spooked out and ready. I started with spiders in the light fixture and a black scarf draped over my painting to make it look a little less pink.

A lot of the decorations were left over from last year, like the little spiders, the tablecloth and the cobwebs. This year, I added lots of Martha Stewart Crafts that another editor gave me at my day job.

All of the wine bottle decorations are from Martha Stewart. You can find them here.  The little owl papers just stick on the front of the bottle. Sophia said they all reminded her of Harry Potter.

For the witchy wine, I combined the sticker from this kit with the witch’s hat from this kit.  My pumpkins are fake ones from Target that I spray painted and glued glitter onto.  (You know I’ll never spray paint a real one again after what happened last year!) 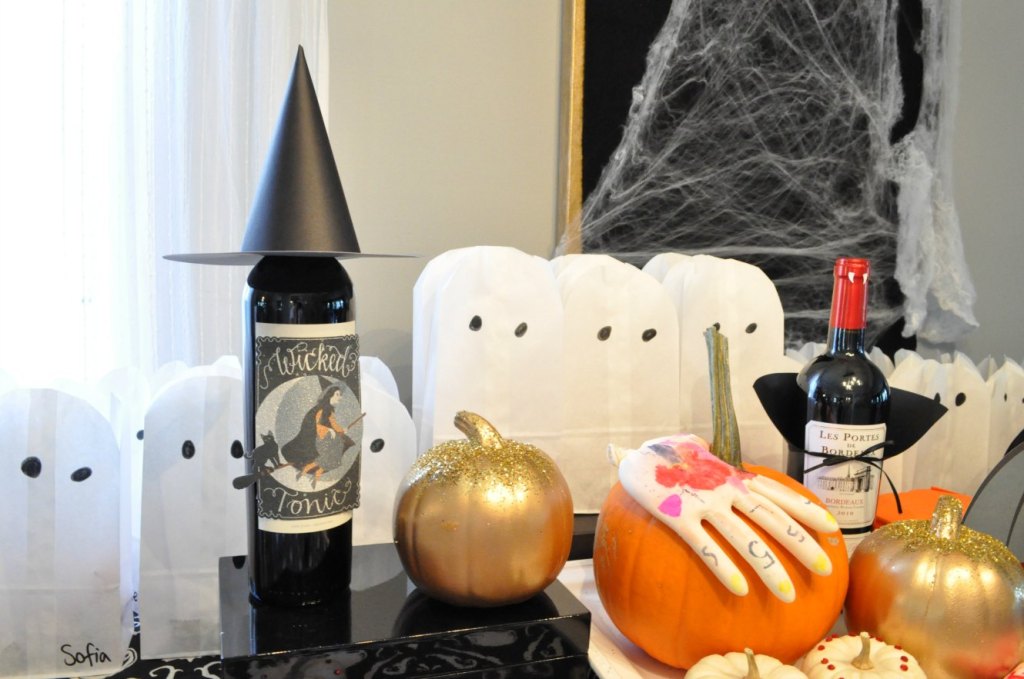 The girls made the creepy hands at an event at Sophia’s school. They’re just medical gloves filled with flour.

My favorite of the wine bottle decorations was this awesome vampire collar. We added fangs from the photo decor kit too.

Sophia made the striped planter at the Y.

Those ghosts in the back are the party favors for the kids. I just trimmed plain white lunch bags to have a ghost shape on top and Soph drew on the eyes.

My glitter skull from last year is sitting on the front windowsill surrounded by brass candlesticks. (And of course, some pretty carnations. They’re my go-to party flower because they’re cheap, pretty and they last a loooooong time.) 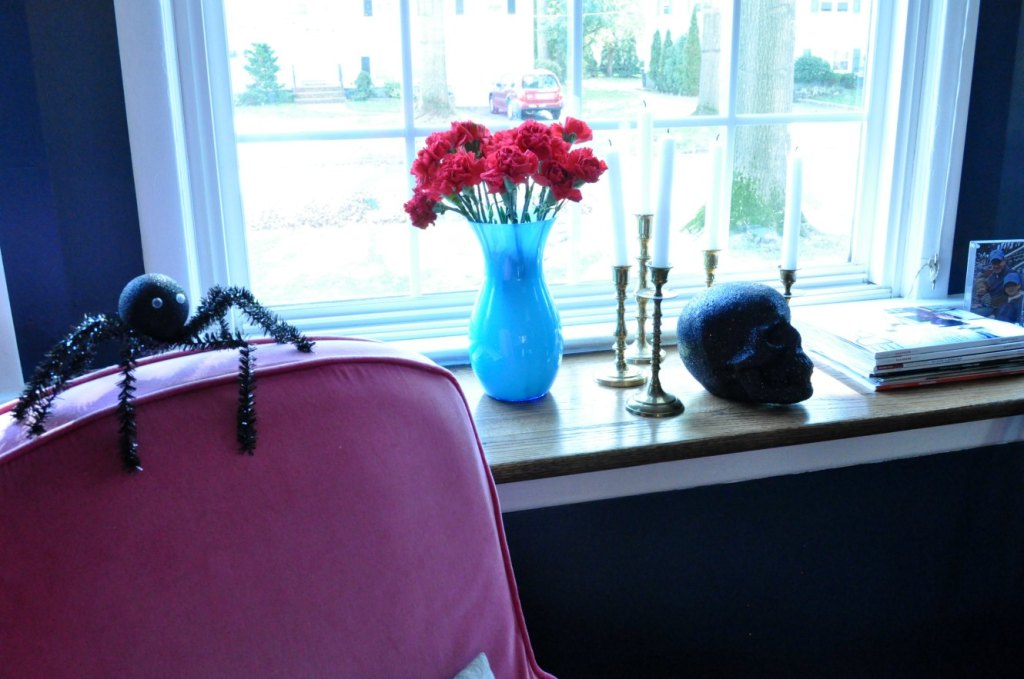 The girls colored pumpkins with metallic paint pens in lieu of carving.

Our front foyer table holds this little glass pumpkin (another Target find) filled with lots of essential Halloween toys like glow-in-the-dark teeth and spider rings. (Because you can never have enough spider rings!)

A little ghost that Lily made in pre-K last year hangs out in the den on top of a bowl of shells. Sometime between last Halloween and now, he lost an eye. But I think it’s a good look for him so we’re going with it!

I also did a couple of the Halloween crafts featured in the October issue of Ladies’ Home Journal so I can talk about them for an upcoming TV appearance on Better TV. This is all day job stuff but I’ll let you know when it’s airing. (Follow Sue at Home on Facebook to hear all about it!) 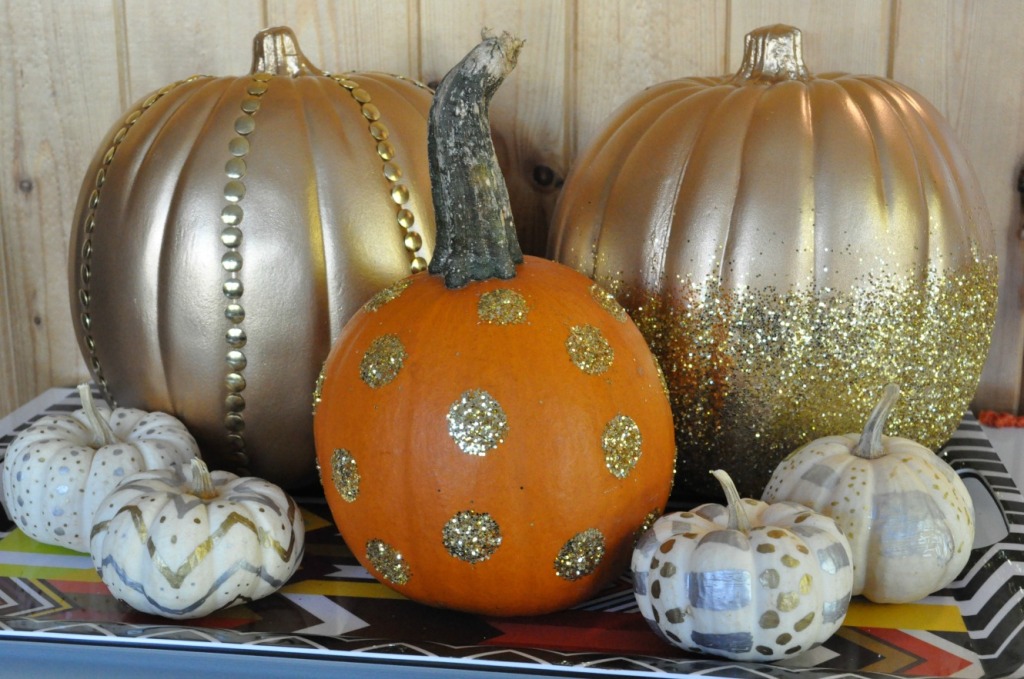 Up in Sophia’s room, she had a blast spookifying her place with this photo kit from Martha Stewart.

Of course, that was before she switched her costume a few minutes before the party. As I told her the first time she changed her mind about her costume, “You can be whatever you want as long as you can put it together from things in this house.” I’m happy to help buy/build/hunt for costumes but not when she changes her mind two days before Halloween! (BTW: She’s a cat–obviously–and Lily is Chee Chee from Teen Beach Movie. When I posted this picture on Instagram, I tagged Chrissie Fit, the actress that plays Chee Chee, and she liked my picture! It’s scary how excited that makes me but you need to understand that this movie is like an Oscar-caliber film in my house and Chrissie Fit is like our Meryl. I don’t even think the girls understand how cool it is!)

And when they’re not being as cute as can be, they can turn up the spook and scare the crap out of you too!

Sue at Home is about my life outside of work. I'm a part-time magazine fashion editor and a full-time mom in the 'burbs. I love renovating my mid-century home, hunting for interior design ideas, being silly with my stylish kids, looking for fun and easy fashion inspiration, and doing all things crafty and creative. (All opinions are mine and not those of my employer.) View all posts by sueathome

Snow day? It’s a great time to shop the Libby & Smee 40% off tassel sale! Visit libbyandsmee.etsy.com where every pair of classic tassel earrings — in long or mini — are only $15 (including domestic shipping!) all weekend long!!! (Sidenote: Isn’t this image by @max_pawlikowsky dreamy?? ❤️❄️ #Repost @max_pawlikowsky with @get_repost ・・・ On my Way to the rear Gosau Lake in Salzkammergut I walked trough this magical Winterwonderland for some hours... It was like a Deam 😁 * *