As you’ll recall from Part 1 of this story, we bought two big copper balls for $10 a piece at the Design Within Reach Annex in Secaucus. They were tagged as being Roberto Menghi’s Globo di Luce pendant but I’m quite sure that the plasticy burnt-out and slightly-scratched balls that we have aren’t the blown-glass originals. (A floor sample perhaps?) But even though they’re just the shell of a Globo di Luce, they’re kind of cool. Yet the question remains–what to do with them?

The original inspiration of using them as an objet was this pic from Apartment Therapy that I pinned as an idea for Pablo’s man cave.

In our house, his “cave” is actually a light filled den with a fireplace…and wood paneling. His one request: The wood paneling stays. So, my plan is to go for a swanky mid-century feel like the picture above. I love how the surveillance mirrors are used as decoration. I figured the balls could sort of do the same thing. But the problem: our rooms are small. And my balls are large. (Go ahead. Let the pre-teen in you have a giggle.) You see, having a 16 inch diameter pair of balls sticking out of the wall looks like Angie from Survivor’s boobs. I stuck one on a nail from a picture of my gallery wall just so you can see what they look like hung – even though I wouldn’t put them in this space. See what I mean?

It can also be hung by the big hole so the smaller opening is on the outside. Let’s try that. Nope…still looks like a boob. But now it’s a boob with a nipple. 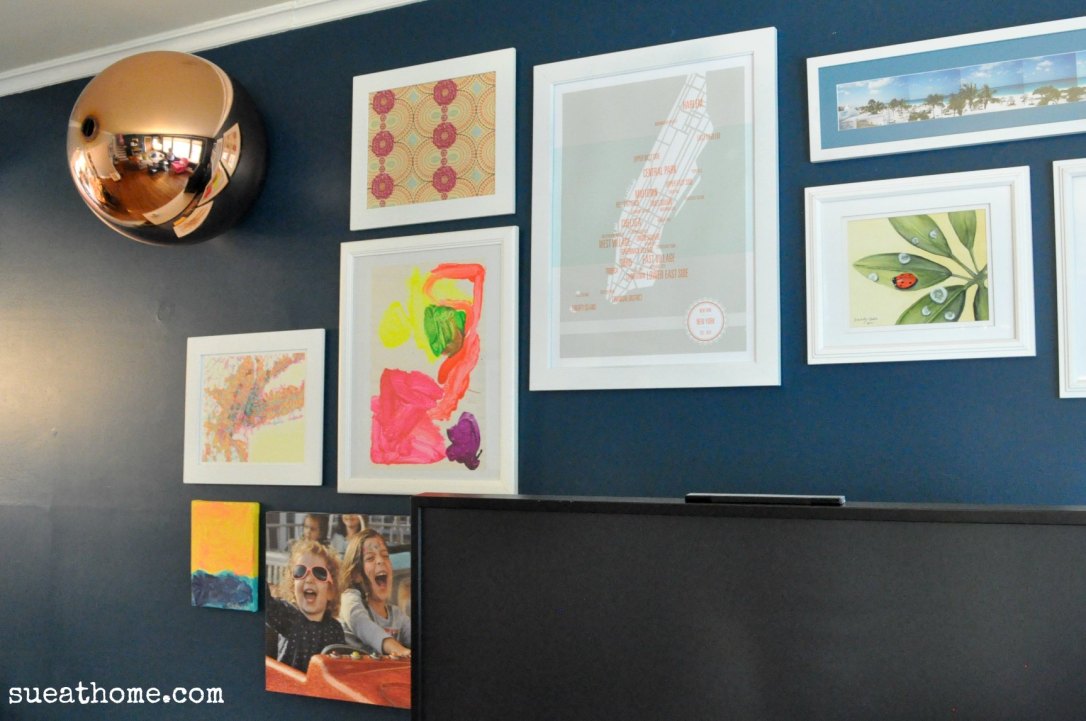 Let’s try something else. Since the den has recessed lighting, I figured we could hang them from the ceiling  just as a decorative object. But the place to do that would be over the table in the den and we thought that would look pretty cool. Until we realized it looked like this from the kitchen. (See below.) Combined with my beloved Hicks pendant in the kitchen, the view became Sphere City.  (For the purposes of this experiment, the role of “Price Is Right Girl” will be played by my hubs. BTW – Did you hear they finally hired a guy to display the washing machines and boats on Price is Right? I think Pablo could have kicked his ass if he had auditioned.)

And don’t forget, I’ve got CB2’s Firefly light in the dining room. (I’ve obviously got an Orb-session. Wonder what Freud would say about that?)

We had them on either side of our entertainment center for a little while but they weren’t great there either. But looking at it now with my pink chair, I’m not hating it. (Though I do hate how it seems to bring more attention to the monstrous TV. (I painted the walls a dark color because I wanted the TV to recede, not stand out.) What do you think?

I figure I can rig them up somehow to hang them right on a wall as long as I find the right space. Maybe in the kitchen?
The living room? The foyer? The bedroom? But would it be too boob-like??

The jury is still out on my copper balls but hopefully I’ll find somewhere to hang them soon. Got some ideas? Please tell me in the comments!